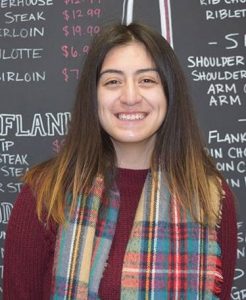 Debbie Machuca has been chosen to receive a Dennis R. Buege Meat Science Scholarship. Muchuca was awarded a $1000 scholarship and a plaque during the Wisconsin Association of Meat Processor’s Spring Convention banquet on April 6.

Machuca grew up in the inner city of Chicago. She is a Dairy Science major at UW-Madison. During the past 3.5 years, she has assisted with slaughter, fabrication, and processed meat manufacturing in Bucky’s Butchery. She has been active in the Badger Meat Science Club. Debbie has further demonstrated her interest in the meat industry by attending a number of conferences and trade shows (Reciprocal Meat Conference, AAMP, Processing Exposition). Debbie is particularly proud of having won the AAMP Reserve Grand Champion for her Spicy Summer Sausage. She interned at Jack Link’s in New Glarus and has an internship planned at Johnsonville for this coming summer. With assistance from Dr. Claus, Debbie wrote a proposal to the Cargill-Benevenga Undergraduate Research Scholarship program which was funded that enabled her to conduct research associated with assessing the chemical and physical properties of smoked, cooked boneless hams. Debbie is currently at Wageningen University in the Netherlands studying abroad. Debbie has maintained an impressive academic record and plans on pursuing a M.S. degree after she graduates.

This article was posted in Blog.