Thinking Outside the Barn 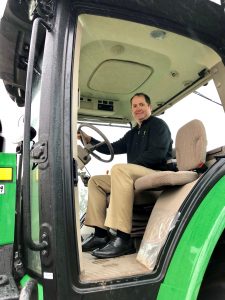 When Rob Rippchen left home to attend the University of Wisconsin-Madison in 1991, he figured it would be a round trip.

“I thought I was going to come home and farm,” recalls Rippchen, who grew up on a 125-cow registered Holstein operation near Richland Center. “I went for the dairy science program. “

Rippchen was right that earning a degree from one of the world’s premier dairy science programs would have been a great way to prepare for a career in the dairy business. But in his case, it turned out to be a good way to prepare for a job—actually, for a variety of jobs—that aren’t connected to cows or milk.

Rippchen has spent the past two decades working in sales and marketing for John Deere. During that time, he has worked across much of the U.S. and on the other side of the world, and worn many different hats.

His first job was in the northwestern U.S. helping to launch a new line of hay equipment. Next he was a territory manager in Oregon, an area dominated by nursery stock and grass seed production. Then he worked in dealer development, first in Reno, then Kansas City, helping dealers improve efficiency and service and grow their businesses.

During three years in Moline as division marketing manager in the U.S. and Canada for seeding equipment, he helped develop a 120-foot row crop planter that can cover over 700 acres per day. Then he went to Singapore to take charge of dealer development leading a team that recruited new dealers and developed existing dealers across Asia and Africa.

He is now based in the Chicago area and serves as a division sales manager in charge of ag and turf equipment sales for Illinois and Wisconsin.

Interestingly, it was his dairy science advisor who gave him the first nudge toward a career outside of the dairy business.

“I took a couple of pre-calculus classes my freshman year and did well. When George Shook, my advisor, saw that, he suggested that I consider a double major in dairy and ag economics, because I already had the two toughest prerequisites out of the way.”

Rippchen did take on the second major and took to it. That led to an internship with John Deere in Minneapolis, his senior year. “By the end of that summer I had a job offer,” he says. “And I guess just I fell in love with it.”

While Rippchen’s many positions with John Deere have drawn heavily on his economics education (which he bolstered a couple of years ago by earning an MBA from Northwestern University) he has found plenty of use for his dairy expertise. That began with his first job providing marketing support for some new forage equipment. When he went to Ottumwa, Iowa to learn the job, he helped bring some fellow trainees up to speed. “It was kind of like raising-hay 101. We helped educate our co-workers on what good hay was and how you make it—things that were second nature to those of us with a dairy background.”

He also draws on leadership skills he developed through student activities, such as chairing the Badger Dairy Club’s big cattle sale. “It taught us how to plan and execute a large-scale event. I learned early on the power of teamwork and that successful leaders empower their team,” he says.

And he makes constant use of critical thinking skills he honed in collegiate dairy judging, in which he had to work against the clock to evaluate and rank groups of cows and then explain his decisions to contest judges.

“Dairy judging teaches you how to take a stance and defend it,” he says. “That translates into what I do day in and day out today, trying to sell our dealers on different programs or ideas. It helps the way you think and it prepares you to be very concise in explaining yourself.”

“Most students don’t know what the opportunities are when they come to campus. There are so many positions that branch out from the dairy industry in so many directions whether it’s sales or marketing or finance or environmental issues or consumer issues. There are a lot of opportunities there if a student wants to get the extra training and skills to be a good match.”

As it turns out, while Rippchen’s career took him far from home farm and away from the dairy business, in the end it brought him full circle.

“The dairy sector is a huge portion of our business in Wisconsin, being able to relate to customers and understand why equipment uptime is so vital to dairies seven days a week has helped me in my current role,” he says.

This article was posted in Blog.