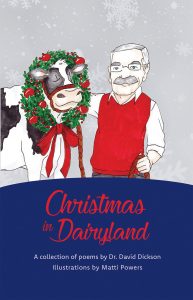 David “Dr. Dave” Dickson was a passionate teacher and successful dairy judging coach at the University of Wisconsin-Madison. Dr. Dave coached teams to the very top, earning seven national championships at the National Intercollegiate Cattle Judging Contest and celebrating 18 team reasons titles at that same national contest – a record that stands to this very day.

In addition to judging, he was also an accomplished artist, singer, musician, and poet. His debut Christmas poem was titled “Bessy the bossy writes to Santa Claus,” and aired over the radio on The Larry Meiller Show in 1968. It was such a hit, that reprints were made and distributed across the country and world. It eventually became a 25-year tradition for Dr. Dave to write a new dairy-related poem each holiday season, many of which were also published in the December issues of Hoard’s Dairyman magazine.

Twenty-seven of Dr. Dave’s poems were first put together in a printed collection in 1996 titled Christmas in Dairyland, and have since been transformed by Hoard’s Dairyman into a second edition earlier this year. The book has a brand new look and feel, and is complete with fresh illustrations created by Matti Powers, a local artist who grew up on a hobby farm just outside of Clinton, Wisconsin.

Larry Meiller, Professor Emeritus at the UW-Madison Department of Life Sciences Communication (previously Agricultural Journalism), wrote in his foreword for the book, “Most people don’t associate poetry with dairy farming, but those people probably never met UW Dairy Science Professor Dave Dickson . . . His poems are at once amusing and passionate, educational and whimsical. They invoke a nostalgia for the way things used to be and offer promise for what might yet to come in dairying,”

Dr. Dave passed away in 2010 after a courageous battle against cancer. To continue his mission, Hoard’s Dairyman is donating a portion of the book’s proceeds to the David P. Dickson Foundation in support of hands-on educational opportunities for dairy youth.

Copies of the book can be purchased through their online bookstore at on.hoards.com/DrDave.